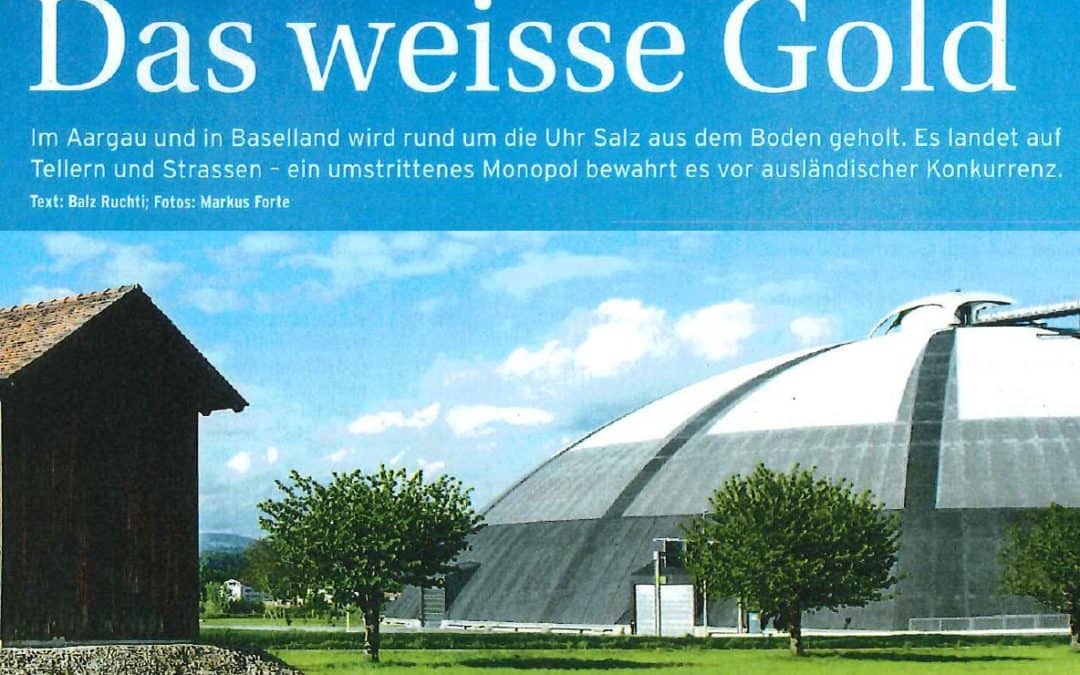 In Aargau and Baselland, salt is extracted from the ground around the clock. It ends up on plates and roads – a controversial monopoly protects it from foreign competition.

Karin Keil was already caught with the first load. An employee of the transport company discovered the packages in a shipment of one and a half tons of spices from South Africa – a good 100 kilograms of the purest, snow-white material. The man immediately picked up the phone.

“He said I had to get an import permit as soon as possible,” says Keil. The 43-year-old had ordered salt from a fair trade saltworks in South Africa to resell it in Switzerland. Now the goods were stuck at the border.

Keil did not have to turn to the state for the permit, but to the Swiss Rheinsalinen AG. She wrote an e-mail late in the evening. At eight the next day her telephone rang. An employee of the Rhine Salt Works explained to Keil that it was forbidden to import salt. The company had a monopoly on salt trading in Switzerland – and no permit was issued for the import of pure salt.

“They wanted me to send the shipment back to South Africa,” Keil said. “I thought: That’s impossible.”

The so-called salt shelf, which regulates salt production and trade in Switzerland, is always forgotten. It is a historically grown construct that reflects the political significance of salt.

The treasure at Muttenz

It is not only a vital mineral for humans and livestock, it was also indispensable as a preservative for thousands of years and therefore a sought-after commodity. Mining and trading was a privilege of the authorities, who sometimes ceded this right to third parties in return for a corresponding fee.

In this country there were only isolated small finds which were not productive enough for self-sufficiency. For this reason, Switzerland was long dependent on imports.

It was not until 1836 that the German businessman Carl Christian Friedrich Glenck discovered a salvific salt deposit on Swiss soil. He had searched in vain for 16 years; deep shafts were drilled in Valais, Jura, Zurich and Schaffhausen before he found it near Muttenz BL. At a depth of 134 metres he came across a thick layer of salt – the remains of a prehistoric sea.

The entrepreneur Glenck founded the Schweizerhalle salt works. Shortly afterwards, three more salt works were built in nearby Aargau, and in the following decades competitors fought over prices. In 1909, the Vereinigte Schweizerische Rheinsalinen AG was founded in order to resolve this. All cantons gradually took part in the company – except Vaud, which operated its own production facility, Saline de Bex SA (until the merger was completed a few weeks ago).

The saltworks retained the sole right of supply. Moreover, the goods could only be resold by the official salt suppliers.

Salt smuggling from canton to canton

Since the governments of the cantons involved set the resale price, there were sometimes considerable price differences within Switzerland. Until the seventies there was therefore a lot of salt smuggling. From cheap Aargau to expensive Solothurn, for example, or from Bern to Fribourg. In Bern, the 50-kilo sack cost CHF 12.50, in Fribourg twice that amount. Farmers hid the cargo in the wooden box of their buckwheels and hurriedly jerked it over the scythe. “And the miller sometimes drove half a truck full over to Freiburg,” Fritz Imhof remembers.

The 79-year-old was the last official salt weigher in Neuenegg BE in the early seventies. Anyone caught smuggling salt was fined five francs a kilo, Imhof explains. In case of a repeat offence, he was threatened with prison. But in his time, there were no longer any strict controls: “They would have had to stop on the Sense Bridge to be discovered.

According to an intercantonal agreement, from 1973 onwards anyone could buy salt directly from the Rhine salt works and resell it, thus eliminating the price differences and consequently the salt smuggling between the cantons.

However, the Swiss salt market remained closed to the outside world. “Please note that you will no longer be able to import pure salt into Switzerland in the future,” was written in a letter that Karin Keil received from Rheinsalinen AG. After some back and forth on the telephone, she had received a permit for her salt “as an exception”, but had to pay 100 francs for the illegal import, in connection with the express prohibition to import further salt. This is because the sole right of supply for the Swiss market also applies to the purchase of “special products not produced by the Swiss Rhine saltworks”.

Urs Hofmeier, Managing Director of Rheinsalinen AG, is prepared to answer questions about the salt monopoly. The model stands for health, solidarity and safety, he says: health, because the population is supplied with iodine and fluorine via salt; solidarity, because the tonne of salt delivered costs the same for all Swiss communities regardless of the transport distance; safety, because the domestic salt warehouses guarantee uninterrupted supplies.

Since the latter did not always succeed in recent years, the salt shelf came under criticism. The weather was to blame. “Whenever road salt became scarce, the shelf was questioned,” says Hofmeier. By far the largest part of production is de-icing salt. A good 350,000 tonnes were sold in Switzerland in 2013. And if the salt runs out in winter, traffic will be paralysed.

In the winter of 2009/10, the Rhine salt works had to allocate salt quotas; mountain cantons with motorways and regions with large transport hubs were supplied first. This annoyed some communities, which were not allowed to buy any other salt because of the monopoly, but at the same time were not sufficiently supplied. Everything called for liberalisation.

However, if supply and demand are allowed to play freely, harsh winters could become expensive for the communities. Four years ago, up to 300 euros per tonne were offered in Germany; for salt that had to be bought from Romania, Dubai or North Africa. In the summer, the same amount cost only a fifth of that.

“In our country, a tonne costs a fixed 140 francs in summer and 190 francs in winter,” says Hofmeier. The Riburg salt works is considered one of the most efficient in Europe. And any surcharge compared to internationally traded salt is justified by the costs of supply security. In order to be better prepared, the Board of Directors has invested around 40 million francs in additional storage facilities in recent years. “Saldome 2 alone cost 26 million francs.” It was put into operation two years ago in Möhlin AG; a self-supporting wooden dome construction in which over 100,000 tonnes of salt can be stored. The smaller sister building can accommodate around 70,000 tonnes.

This storage capacity should prevent bottlenecks like in 2009. Thanks to the past mild winter, stocks have already been replenished. Under the mighty wooden domes at the Riburg salt works and in regional warehouses and local silos throughout Switzerland there are now 400,000 tonnes of salt. “This is almost five times the amount needed in the most severe winter month to date,” says Hofmeier. And until the stocks are used up, another 180,000 tonnes could be produced.

Thanks to the investments made, the last winter of the century – that of 2012/13 – has already been mastered without supply bottlenecks. Hofmeier looks forward to the coming winter with confidence.

However, critics continue to doubt whether the monopolist will be able to provide the service more cheaply overall than the free market. The Federal Council is also of the opinion that the current situation is outdated, but the cantons as owners of the salt works are sticking to their guns. After all, they earn money with it: the average annual profit is around 16 million Swiss francs, with sales of 100 million, says Hofmeier. In harsh winters, much more. “This year we’re in the black because of the mild winter.”

An agreement reached with the price supervisor at the beginning of the year stipulates that profits exceeding a certain threshold will in future be refunded directly to the customers – these are primarily cantons, towns and municipalities that have purchased the road salt. “Last year we refunded one million francs – down to 50 francs,” says Hofmeier.

The price watchdog became active because the profits were distributed in accordance with the shareholding. Cantons with a lot of shares and low salt requirements benefit excessively in harsh winters, while the others pay above all.

In the agreement, the import regulations for table and wellness salt were also relaxed: in future, salts that the Rhine saltworks do not carry in their range may be imported – for quantities of up to 500 kilograms, the permit costs CHF 100 including shelf charges. Karin Keil’s delivery last year would therefore be legal today.

Health, solidarity and security of supply in honour – but what do import restrictions on salt specialities contribute? Hofmeier says it is about keeping large quantities away from the domestic market: “Salt is difficult to differentiate – if we simply release everything, you could theoretically import cheap table salt and sell it as de-icing salt in winter”.

This could put the company in trouble. But security of supply could only be guaranteed if Switzerland had a running salt works.

Perhaps the proponents of the monopoly also have another peculiarity of the mineral in mind: salt flows like a liquid. If a grain of salt finds an opening, the next one follows it, then the next one, and so on. Incessantly, until the charge is lost. Then every loophole becomes a huge problem.