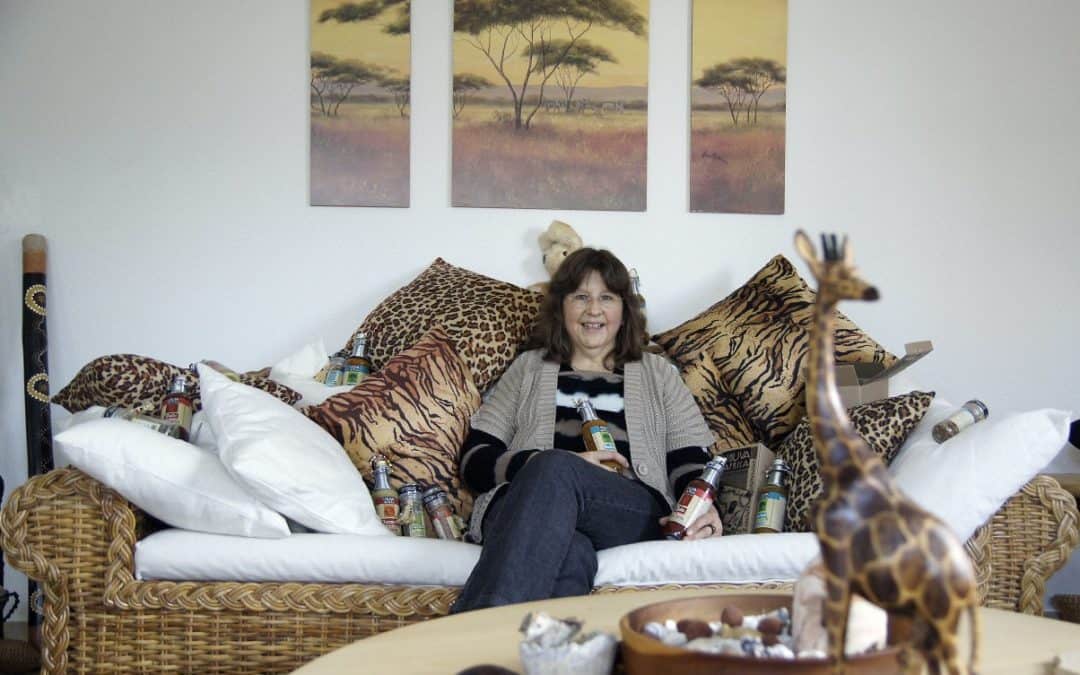 A cardiac arrest changed her life.

Three years ago Karin Keil ended up in hospital with a cardiac arrest. When she awoke from her coma 16 days later, nothing was the same. Although the dietician now works in the office again, her heart beats above all for fair trade in South African spices and sauces.

Not only her living room conjures up an “Out-of-Africa” atmosphere in the misty cold winter day, but also her hearty laugh. Karin Keil lives with her cats in the Dietlik terraced house where she grew up. The 41-year-old develops her taste for South Africa very early in her life. Because her older brother had emigrated there early on. She visits him when she is twelve years old – and at first she is just shocked. “In the middle of the apartheid system, everyday life for a Swiss girl at that time was almost incomprehensible. I had been brought up to be tolerant and suddenly I was not supposed to talk to people just because they were dark-skinned,” she says today.
Since then, she has travelled to Southern Africa countless times on holiday, even though her brother now lives in Switzerland again. In just under two months, she will be back in South Africa again in February to look after her beloved spices and the hand-harvested Khoisan sea salt. But how did it come about in the first place?

Breakup after cardiac arrest and coma
Three years ago Karin Keil suffers a cardiac arrest, ends up in hospital as an emergency and falls into a coma. “When I came to after 16 days, nothing was the same. I had to relearn many everyday things. At the same time, I started thinking about my life in a completely new way,” explains the Dietarian. Although she now works again on an 80 percent workload in the office of a facility pool, she tries to take everything with more serenity and ease. At the same time, her South African spice mixtures of “Ukuva i Africa” – which means “the meaning of Africa” – which she loves to use for cooking, are suddenly no longer available in Switzerland. “Stubborn as I am, I decided without further ado to simply import these spices and sauces myself and sell them on a small scale as my new hobby,” laughs Karin Keil.

Fair trade in the cellar
The woman with the African flair is now standing in her fantastically fragrant cellar. After she had ordered only little at the beginning, quasi for the extended personal need, approximately two and a half tons of spices in handy mills and sauces in original bottles are stored for some weeks with her at Rebackerweg 26th Customer can either purchase the goods directly from her or over the Internet under www.ukuva.ch. But she is also often to be found at markets. “At the Afro Whitsuntide in Winterthur, for example, things went really well at the stand,” says Karin Keil happily. Otherwise, however, the trade is still capable of expansion. Interested retailers would therefore also be very welcome.

For a good cause
«Ukuva i Africa» works closely with the foundation “Cape Mental Health Society” With high-quality natural ingredients, the decorative fair-trade specialities delight both end consumers and unemployed township residents. This is because they get fairly paid jobs as well as support in the form of workshops on AIDS prevention, conflict resolution or household budgets. In addition, part of the profit is used for the education of the workers and their children. And for Karin Keil, the healing contact to Africa is maintained.